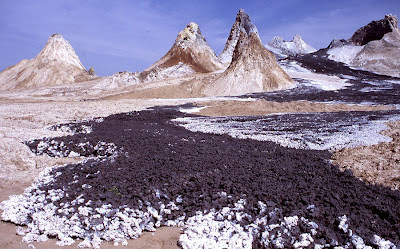 Oldoinyo Lengai Volcano (Tanzania) is the only volcano erupting silvery Carbonatite lava in historical times. Unlike normal lava, this lava looks like a silvery mud as it is too cool (550-700 deg. celsius) to glow visibly during daylight. A very weak glow can be observed at night and captured by long exposure photography (see e.g. http://www.photovolcanica.com/Volcano...)
Currently the type of activity shown can not be viewed following larger eruptions in 2007-2008 which left a large crater and removed the small eruptive cones as seen in the footage. The footage taken in July 2000 shows an extremely active cone on the main crater floor. A brief view is taken into the tiny lava lake in the top of the cone during a phase of reduced activity and multiple overflows and resulting lava flows and other features are documented.
The video is copyrighted material. Please do not reupload copies of the video to youtube or other video platforms. You can watch the original video for free as often as you like on youtube or download for personal viewing.