A landslide or landslip is a geological phenomenon which includes a wide range of ground movement, such as rockfalls, deep failure of slopes and shallow debris flows, which can occur in offshore, coastal and onshore environments. Although the action of gravity is the primary driving force for a landslide to occur, there are other contributing factors affecting the original slope stability. Typically, pre-conditional factors build up specific sub-surface conditions that make the area/slope prone to failure, whereas the actual landslide often requires a trigger before being released.


Anatomy of a Landslide 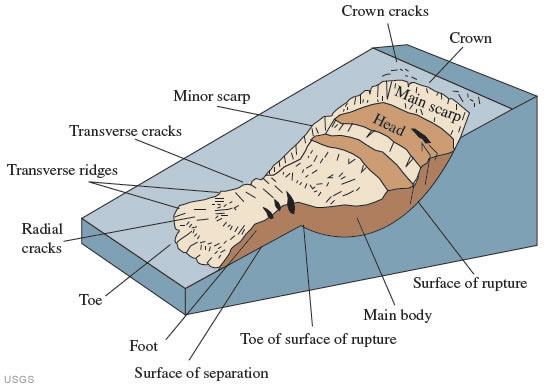 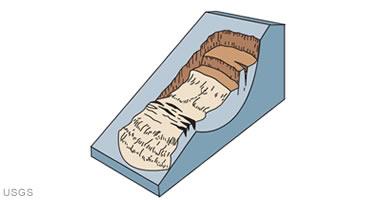 Rotational slide: This is a slide in which the surface of rupture is curved concavely upward and the slide movement is roughly rotational about an axis that is parallel to the ground surface and transverse across the slide. 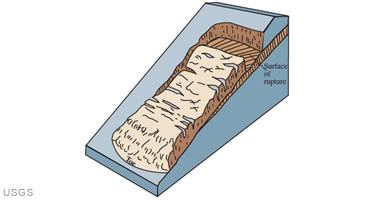 Translational slide: In this type of slide, the landslide mass moves along a roughly planar surface with little rotation or backward tilting. 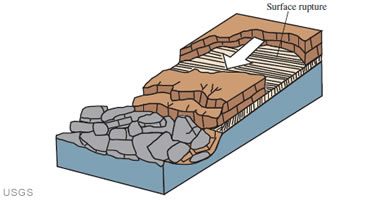 Block slide: is a translational slide in which the moving mass consists of a single unit or a few closely related units that move downslope as a relatively coherent mass. 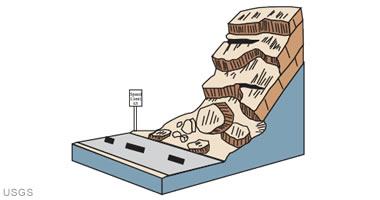 Fall: Falls are abrupt movements of masses of geologic materials, such as rocks and boulders, that become detached from steep slopes or cliffs. Separation occurs along discontinuities such as fractures, joints, and bedding planes, and movement occurs by free-fall, bouncing, and rolling. Falls are strongly influenced by gravity, mechanical weathering, and the presence of interstitial water. 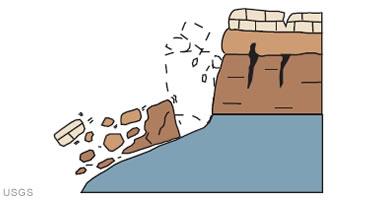 Topple: Toppling failures are distinguished by the forward rotation of a unit or units about some pivotal point, below or low in the unit, under the actions of gravity and forces exerted by adjacent units or by fluids in cracks. 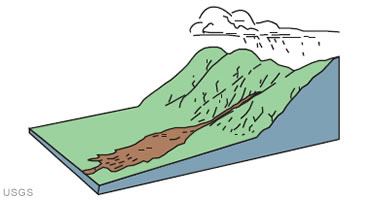 Debris flow: A debris flow is a form of rapid mass movement in which a combination of loose soil, rock, organic matter, air, and water mobilize as a slurry that flows downslope. Debris flows include less than 50% fines. Debris flows are commonly caused by intense surface-water flow, due to heavy precipitation or rapid snowmelt, that erodes and mobilizes loose soil or rock on steep slopes. Debris flows also commonly mobilize from other types of landslides that occur on steep slopes, are nearly saturated, and consist of a large proportion of silt- and sand-sized material. Debris-flow source areas are often associated with steep gullies, and debris-flow deposits are usually indicated by the presence of debris fans at the mouths of gullies. Fires that denude slopes of vegetation intensify the susceptibility of slopes to debris flows. 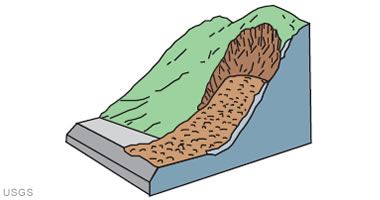 Debris avalanche: This is a variety of very rapid to extremely rapid debris flow.

Earthflow: Earthflows have a characteristic "hourglass" shape. The slope material liquefies and runs out, forming a bowl or depression at the head. The flow itself is elongate and usually occurs in fine-grained materials or clay-bearing rocks on moderate slopes and under saturated conditions. However, dry flows of granular material are also possible.
Mudflow: A mudflow is an earthflow consisting of material that is wet enough to flow rapidly and that contains at least 50 percent sand-, silt-, and clay-sized particles. In some instances, for example in many newspaper reports, mudflows and debris flows are commonly referred to as "mudslides." 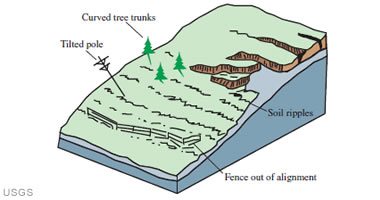 Creep: Creep is the imperceptibly slow, steady, downward movement of slope-forming soil or rock. Movement is caused by shear stress sufficient to produce permanent deformation, but too small to produce shear failure. There are generally three types of creep: (1) seasonal, where movement is within the depth of soil affected by seasonal changes in soil moisture and soil temperature; (2) continuous, where shear stress continuously exceeds the strength of the material; and (3) progressive, where slopes are reaching the point of failure as other types of mass movements. Creep is indicated by curved tree trunks, bent fences or retaining walls, tilted poles or fences, and small soil ripples or ridges.

Lateral Spreads: Lateral spreads are distinctive because they usually occur on very gentle slopes or flat terrain. The dominant mode of movement is lateral extension accompanied by shear or tensile fractures. The failure is caused by liquefaction, the process whereby saturated, loose, cohesionless sediments (usually sands and silts) are transformed from a solid into a liquefied state. Failure is usually triggered by rapid ground motion, such as that experienced during an earthquake, but can also be artificially induced. When coherent material, either bedrock or soil, rests on materials that liquefy, the upper units may undergo fracturing and extension and may then subside, translate, rotate, disintegrate, or liquefy and flow. Lateral spreading in fine-grained materials on shallow slopes is usually progressive. The failure starts suddenly in a small area and spreads rapidly. Often the initial failure is a slump, but in some materials movement occurs for no apparent reason. Combination of two or more of the above types is known as a complex landslide.