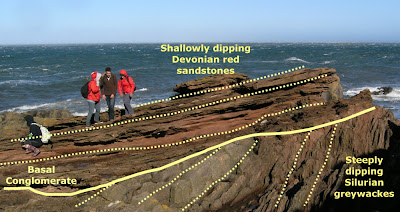 Hutton's Unconformity is any of various famous geological sites in Scotland. These are places identified by 18th-century Scottish geologist James Hutton as an unconformity, which provided evidence for his Plutonist theories of uniformitarianism and about the age of the Earth.


Chris Wilson:
There are some special places where the immensity of geological time becomes clear and this is arguably the most special of those special places. It's Siccar Point on the south coast of the Firth of Forth in Scotland. And it's here where the concept of an unconformity was first discussed and described. What is unconformity? Well it's a junction between two groups of rocks that are completely different in character and age. Let's work out way through this one now.

The older rocks at this junction are these. They're grey rocks that were deposited deep in an ocean and they've been tilted now so that the original horizontal layers are standing up on end and here they meet the younger groups of rocks. The younger groups of rocks are red, much sandier, slightly tilted and the junction between the two couldn't be clearer. And there are fragments up here within the beds of the younger ones. Why is Siccar so special?
Because it's here that unconformities were discovered by James Hutton at the end of the 18th century. Now Hutton was a fantastic scientist. He was the father of modern geology. He did 'an Einstein 'on the subject, he solved a problem before anybody else knew there was a problem there. And he came here with a group of friends to show them the immensity of what he discovered and the account they wrote of the visit was 'electric', and I want to read part of it to you now. "We made for a high rocky point or headland, the Siccar. On landing at this point we found that we'd actually trode on the primeval rock. It is here a micaceous in beds nearly vertical, highly indurated, and stretching from south east to North West. The surface of this rock runs with a moderate ascent from the level of low water at which we'd landed, to that of high water where the schistus has a thin covering of red horizontal sandstone laid over it.
This sandstone, a few yards further back, rises into a very high perpendicular cliff. Here, therefore, the immediate contact of the two rocks is not only visible but is curiously dissected and laid open by the action of the waves. The rugged tops of the schistus are seen penetrating into the horizontal beds of sandstone, and the lowest of these last form a breccia containing fragments of schistus, some round and others angular." Or Hutton was highly pleased. On those of us who saw this phenomena for the first time the impression made will not easily be forgotten. We felt ourselves necessarily carried back to time when the schistus on which we stood was yet at the bottom of the sea standing upright in vertical beds. And the sandstone was only beginning to be deposited. An epocha even more remote presented it'self when the most ancient of these rocks lay at the bottom of the sea and was not yet disturbed.