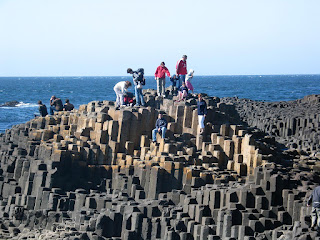 GLYNDA:
Perhaps on first sight of this classic formation stepping as it were out of the sea, we can imagine how tempting it was to think, as did some early geologists known as Neptunists, that these rocks had a marine origin. But this is evidently not the case for the rock composing the Giant's Causeway in County Antrim, Northern Ireland -lets take a closer look and see if we can discover some of the reasons why...

The vertical columns and horizontal cracks indicate that this could be some sort of a lava flow -the main joints have developed perpendicular to the cooling surfaces. And it may appear that the lava flow is dipping towards the left but this isn't the case. It's simply an erosion feature brought about by the sea. Contraction of the lava flow as it collected has caused these hexagonal columns to form on cooling. Further cooling and shrinkage has formed these interesting convex and concave surfaces. Some of the columns are hexagonal. Others are seven sided ,five sided, or even four sided. We call this polygonal jointing.
We're not able to hammer here to get a fresh piece of rock because it's a protected site but there are plenty of fresh surfaces that we can look at. There's still not very much to see so we really need to look at a thin section. This shows a rock with a finely crystalline texture. The crystals are interlocking with random orientation indicating an igneous rock which cooled fairly quickly. Between crossed polars it contains small crystals of twinned plagioclase feldspar with first order interference colours, together with mafic minerals such as olivine and pyroxene though these are less obvious because they've been altered.
Looking at the thin section confirms that this is in fact a basalt, but there are other clues that we can look for.

Tratto da: Rocks in the field - for iPod/iPhone - iTunes U - The Open Univesity 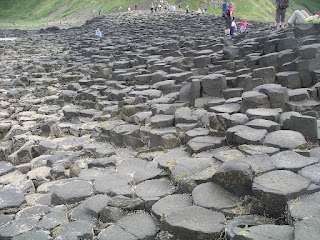