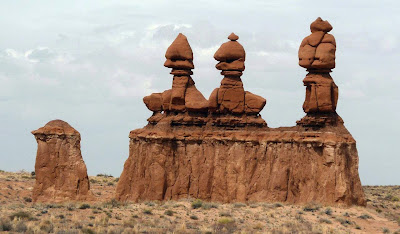 Goblin Valley State Park is a state park of Utah, USA.
Goblin Valley is a 3,654-acre state park in central Utah. The park is famous for its thousands of hoodoos, which consist of an erosion-resistant layer of rock sitting upon softer sandstone. 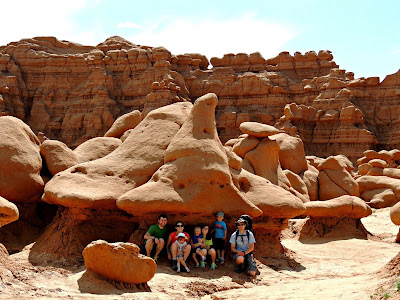 Its eminent feature is its thousands of hoodoos and hoodoo rocks, referred to locally as “goblins”, which are formations of mushroom-shaped rock pinnacles, some as high as several meters. The distinct shape of these rocks comes from an erosion-resistant layer of rock atop softer sandstone.

The park lies within the San Rafael Desert southeast of the east limb of the San Rafael Swell and north of the Henry Mountains. Utah State Route 24 passes about four miles east of the park. Hanksville lies 12 miles to the south.
Hiking is permitted in the park, which features three marked trails.